The Alan Blueford Center For Justice is on Twitter!

Posted on November 19, 2014 by missmollie33 | Comments Off on The Alan Blueford Center For Justice is on Twitter!

The Alan Blueford Center For Justice is on Twitter!  @abc4justice

Comments Off on The Alan Blueford Center For Justice is on Twitter!

SONG FOR OUR MOTHERS

Huge Thanks To Brian Reems For Singing This Beautiful Song To Our Mothers.

#HH2H Helping Hearts 2 Heal is about/for mothers who have experienced loss, however, this loss does not have to be specific to a child, for example, this conference is also intended for Patricia DeSantis, who thankfully has her children, but her husband was murdered by Santa Rosa PD. This conference is also for people like Al Osorio & Tracey Bell-Borden who work closely with a mother who has experienced loss, Denika Chatman’s son was murdered by SFPD. When they say, “it takes a village to help raise a child”, well the same is true to help a mom/family who has lost a child, or a loved one, “it takes a village”.

This Video Was Edited By: http://www.TheGreenSceneTV.com

Comments Off on SONG FOR OUR MOTHERS

Filmed and Edited by Alex Levy

Comments Off on THE PEOPLE MAKE HISTORY

FIND OUT WHAT IS HAPPENING IN YOUR CITY & PLEASE SHARE!

Comments Off on National Day Against Police Brutality Oct. 22 (Advert) 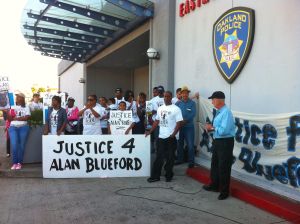 The Alan Blueford Center For Justice endorses Dan Siegel for Oakland for the next Oakland Mayor because he has walked his talk for his entire life which led him to be one of the Blueford family’s lawyers standing up to the injustice & corruption in Oakland City Hall who is under the leadership of Oakland Mayor Jean Quan.  When the Oakland City Council & OPD were actively covering up the outright lies told by [former] OPD officer Miguel Masso & perpetuated by [then] OPD chief Howard Jordan about the details of Alan Blueford’s murder, Dan was leading the fight for Justice 4 Alan Blueford & to stop racial profiling & to end police terror.

“Growing up in a working-class Jewish household in New York City, my parents taught me at a young age that Jews could not get jobs at big banks or the power company. But my father was quick to point out that no matter how bad we had it, “Negroes had it worse.”
That was the beginning of my awareness that the color of my skin would open doors for me which were forever sealed shut for other Americans because of the color of their skin.  It became my mission to stand alongside those excluded from the American dream and help knock down those doors of injustice.”             ~ Dan Siegel

The Alan Blueford Center For Justice stands with The People against Urban Shield & the increased militarization of OPD & PD’s across the nation & globe from #Oakland2Ferguson2NYC2Palestine.

These are a few photos to document the community uniting to stand against police terror resulting from the over-militarization of the police…as well as racial profiling & economic inequalities, but the Urban Shield conference that comes to Oakland every year is about militarizing the police.
#EndPoliceTerror #AllLivesMatter Continue reading →

Ras Ceylon gives a S/O to an event happening on June 7, 2014 in Santa Rosa, CA to honor Andy Lopez who was murdered by Erik Gelhaus of Santa Rosa Sheriff’s Dept.

from the Facebook event page:
Please include this event in your June calendar. Andy Lopez will be honored by family, friends and supporters on the occasion of his 14th birthday. Andy will be celebrated by both those who knew him personally and by those who have been seeking a just response to his death. Speakers at the opening and concluding gatherings will share what Andy’s life and memory mean to them and what they expect to be his lasting legacy.

The noon march will lead by Danza Azteca Coyolxauqui and by youth contingents from Andy’s Youth and the Windsor Bloco Youth Ensemble. Participating group members of the Justice Coalition for Andy Lopez (JCAL), and Mothers in White, as well as other local and state-wide supporters and groups (see enclosed flier for complete list of endorsers).

The event, entitled, “Not Forgotten — Andy Lopez Presente!,” will begin at 11:00 on June 7th with a gathering at 665 Sebastopol Rd. (Dollar Tree parking lot). At noon, participants will march to central Santa Rosa for a culminating birthday rally at Old Courthouse Square.

THIS VIDEO IS BROUGHT TO YOU BY THE GREEN SCENE TV: http://www.thegreenscenetv.com/

THIS VIDEO IS ALSO BROUGHT TO YOU BY THE ALAN BLUEFORD CENTER FOR JUSTICE: https://www.facebook.com/ABC4JUSTICE

Comments Off on @RasCeylon-#JusticeForAndyLopez June 7, 2014

Posted on June 3, 2014 by missmollie33 in Uncategorized

Terrorists–which in this case are the police–attempt to divide & conquer by purposefully instilling a sense of fear & hopelessness into a population or community for a political agenda. Unity in the community is the answer to this terror.

On Saturday May 3, 2014 the Blueford family invited the community to join them in a walk around Lake Merritt to celebrate their son’s, brother’s, cousin’s, uncle’s, nephew’s life on the 2 year anniversary of his death. Alan Blueford died b/c a violent, racist, out of control OPD officer murdered him. The walk was a message that Alan’s life matters, all lives matter, including black ones, brown ones, poor ones, mentally ill ones….all lives matter, and we united as a community on May 3, 2014 to send this message in true Oakland fashion….this video of Kev Choice is the 1st of many to come from The Alan Blueford Center For Justice documenting all that happened on this amazing day in history, as we celebrated Alan’s life, we also united as a community against police terror.

THIS VIDEO WAS CREATED BY: The Green Scene TV

Posted on June 3, 2014 by missmollie33 in Uncategorized

Phanom performs in honor of his friend, Alan Blueford, at Heals 2 Heal 4 Alan Blueford #H2H4ALAN on May 3, 2014 during a walk around Lake Merritt celebrating Alan’s life on the 2 year anniversary of his passing. 18yo Alan was murdered in an instance of racial profiling by an OPD officer; while Alan did nothing wrong, AND it is proven that officer Miguel Masso lied about the circumstances surrounding Alan’s murder, it was still ruled “a justifiable homicide” by Alameda Co DA Nancy O’Malley and this ruling was backed by CA Attorney General Kamala Harris. This is not a surprise given Johannes Mehserle, who murdered Oscar Grant on camera on Jan 1, 2009, is so far the ONLY police officer to be convicted of murder in the state of CA, and he served 11 months in a jail where he was segregated from the rest of the population. While this trial & sentence for Johanes Mehserle is landmark in the history of fighting police terror, it is a slap in the face of Justice. We, The People, stand United against police terror, we do not look to DA’s & AG’s for Justice, we look to US. #UnitedWeStandAgainstPoliceTerror #EndPoliceTerror #Justice4AlanBlueford #AllLivesMatter #H2H4ALAN

THIS VIDEO WAS CREATED BY: The Green Scene TV

For more info about what happened to Alan

Posted on June 2, 2014 by missmollie33 in Uncategorized